For the past year, I have been posting a series of Photoshop Elements tutorials, covering both the Organizer and Photo Editor modes. The series started using PSE 15. When PSE 2018 was released I switched to this new version. However, those that were written using PSE 15 screen shots as the figures are virtually the same for PSE 2018, the latest version of Elements.

These tutorials are based on updated handouts that were part of my Photoshop Elements classes I taught. Some of the tutorials are videos. They all are PDF files that can be downloaded and printed.

I will be continuing the series shortly usig PSE 2018. I hope you find these useful.

If you have been reading my blog posts for the past several months, you know I have been posting a series of Photoshop Elements 15 tutorials, covering both the Organizer and the Photo Editor.

Well, now that PSE 2018 has been released, I will continue the series, but will be using PSE 2018 for the figures and any changes to the steps in PSE 15 that were introduced in PSE 2018. Additionally, I will be posting tutorials that go into more of the details on how to use the brand new features of PSE 2018.

This tutorial will cover the Refine Edge Tool. Accessing the tool has been made easier in more recent versions of PSE, because there is a button to access the tool from the various selection tools, as shown in the figure below. You can still access it from Select > Refine Edge from the Menu bar, however.

Click on the link below to open the PDF file containing the tutorial.

There is also the Refine Selection Brush tool, that is available as one of the selection tools from within the Tool Option bar as shown below. This tool works essentially the same as the Refine Edge. It basically is just an alternative way to access the basic capability.

Linda Sattgast (www.digitalscrapper.com) has an excellent YouTube video describing how to use the Refine Selection Brush. Its link is shown below.

However you chose to access Refine Edge, brush or tool, it can really improve your selections, especially if they contain hair.

Yesterday, Adobe held their usual annual event in Las Vegas, Adobe Max where generally they make product announcements. During the event, they announced major upgrades to Lightroom and Photoshop CC. This comes after announcing Photoshop Elements 2018 and Premiere Elements 2018 a couple of weeks ago.

As you may know already, photography websites and group forums are filled with the news and information about the new features added to all three programs. Normally, my blog posts concentrate on my personal observations and tips. However, there has been so many quality articles published yesterday, I am going to concentrate on providing links to three I found very helpful, which were written by the real experts. There are many more out there, and I am sure many more will be coming in the weeks and months ahead. This is a very exciting time for Photoshop CC and Lightroom users.

This article does a good job explaining the name changes and new versions of Lightroom. It is by Victoria Bampton, who is a well known expert and author of books dealing with Lightroom.

Likewise, Laura Shoe is another Lightroom expert who has written several books and authored courses. In her web post linked below, she also covers the pricing for the programs.

Colin Smith, of Photoshop Café, is both a Lightroom and Photoshop expert who writes extensively and has multiple videos describing how to use these programs. I have several of his videos. He also flies a drone, and has produced several videos on using it to create great photos and videos. I have taken advantages of these to improve my own drone photography. Here he explains the new features added to Photoshop CC, and Lightroom.

As you know my prime digital photography activity is with using Photoshop Elements and Premiere Elements. However, I do use Photoshop CC and Lightroom. I am getting closer to adapting my basic workflow and software to theses latter programs. yesterday’s announcements are moving me closer to that. How about you?

Look for more coverage on both Lightroom and Photoshop in the future. 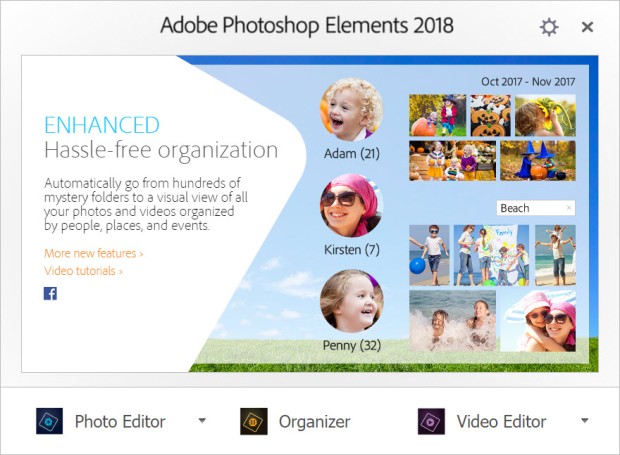 CLICK HERE to view their announcement. Announcing the next version of Elements in Fall has become a ritual with Adobe. I have been using the beta version for the past several months, and PSE 2018 has several new features that I am sure will be popular with new and old users alike.

In the coming weeks and months, I will be posting tutorials on several of the new features, but for now, here is quick rundown.

As you can see from the figure below, the Photo Editor workspace has remained the same. For those of you who are using PSE 11 or later versions, you will find yourself right at home.

As is generally the case with these annual updates, PSE 2018 is an incremental upgrade to PSE 15. Most of the work in the Photo Editor has been adding new Guided Edits. A couple of new and exciting tools have also been added.

This tool is has been added to the other selection tools previously a part of the Photo Editor. It can be accessed from both the Quick and Expert editing workspaces.

Basically, how you use it is to draw a rectangle or oval around the object you want to select. Once you let go of the mouse, PSE 2018 makes the selection. Depending upon the background, the initial selection will need some fine tuning, which you can do with the other Selection Tools available.

In the example below, there is a somewhat complicated background, so the selection is going need fine tuning. For more solid backgrounds, the new Auto Selection Tool can get quite close to the final selection.

We have all been in a position where we are taking a group photo and we have a great photo, except one person has their eyes shut. That is where the new tool, Open Closed Eyes comes in. The figures below outline the process. The tool is quite flexible as to where you obtain the source photo. 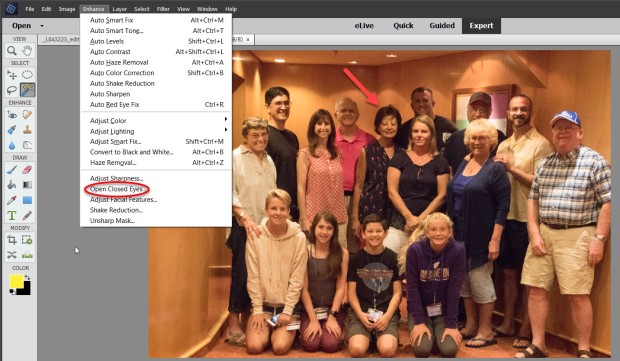 PSE 2018 Photo Editor includes four new Guided Edits. Guided Edits essentially lead you step-by-step through the process of creating the final effect. Some of the Guided Edits are relatively simple and others can be several steps. Pretty much all of them can be further tweaked from within the Expert mode of the Photo Editor.

The Watercolor effect is found in the Special Edits group of the Guided workspace.

It’s an example of a multi-step Guided Edit..

This effect is found in the Fun group of the Guided Edits workspace. Again, this edit includes several steps to guide you through the process. 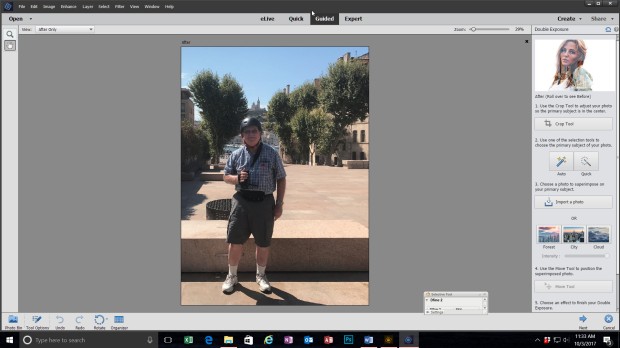 Given the right picture and your creativity, very interesting photo interpretations are possible. As you can see from the figure below, my creativity needs some (ok, a lot of) improvement.

The figure below displays just how many layers and operations are employed. It also illustrates how the Expert Edit mode is available to further edit the photo to reach the desired result. 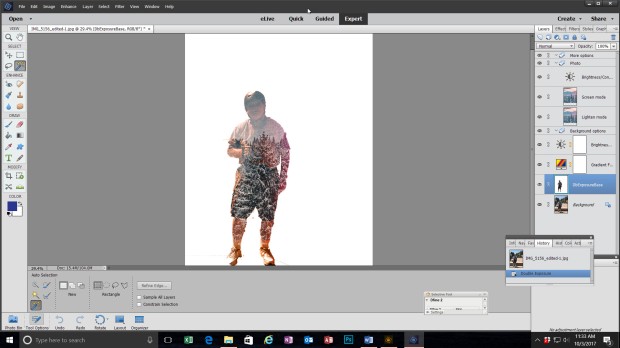 The Shape Overlay is another Fun Edit within the Guided Edit workspace.

The figure below shows the various things you can do with the result of the Shape Overlay Guided Edit. In fact, this screen is typical for other Guided Edits, including sharing the resulting photo.

The final new Guided Edit introduced in PSE 2018 is the Replace Background. This one is found in the Special Edits group. 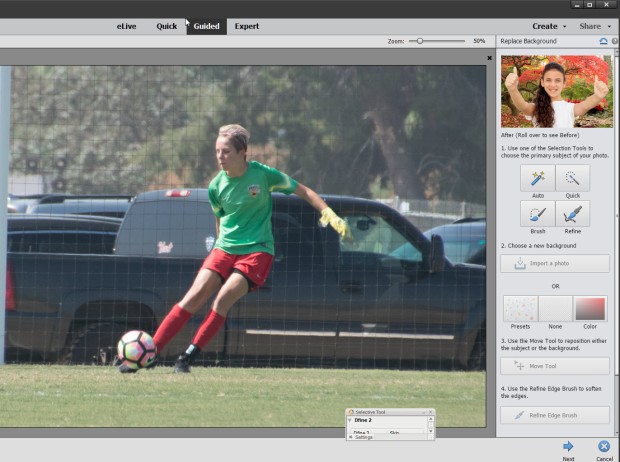 Notice in the figure below, in addition to selecting a preset, as I did here, you can also select one of your own photos for the background. 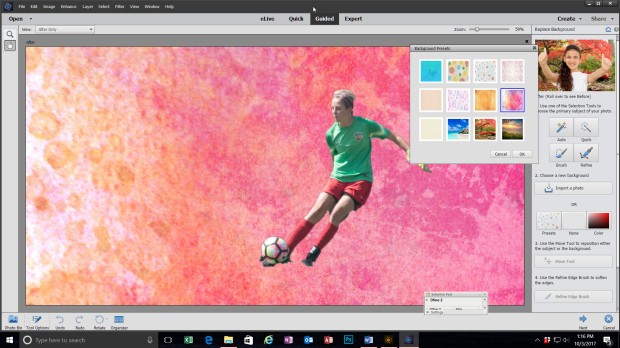 Well there you have it. This new version of PSE 2018, although an incremental upgrade, probably has something for everyone.

Over the coming weeks and months, I will be posting tutorials, both written and videos, on the new PSE 2018, as well as Premiere Elements 2018 (PRE 2018). Stay tuned.

CLICK HERE to view their announcement. Announcing the next version of Elements in late September has become a ritual with Adobe. I have been using the beta version for the past several months, and PSE 2018 has several new features that I am sure will be popular with new and old users alike.

In the coming weeks and months, I will be posting tutorials on several of the new features, but for now, here is quick rundown. I will cover the Organizer, in this post. I will briefly describe the Photo Editor module in a second post shortly.

One of the primary goals of the development team was to improve the performance of the Organizer. They have accomplished this in several areas. These improvements are under the hood, and the  improvement you will see will depend upon your computer system and what Organizer features you use.

As you can see from the figures in this post, the look of the Organizer has not changed much from recent versions. So coming up to speed and getting right into the new features will be quick for current PSE users.

A new feature that Organizer users will like is the new Auto Curate. Using it gives you a jump on screening your images. As shown above, it is accessed by checking the small box in the upper right corner of the Grid.

The accuracy and performance of Face Recognition continues to be improved with each new version. To be honest, I still do not use it regularly. The number of people I am interested in tagging are only few. Also, the program cannot identify someone from their profile, which other programs suffer from as well.

In this edition of PSE 2018, when geo-tagging photos using Places, a fourth level of detail has been added to the description of the location. Many users have been requesting this expansion.

My favorite new feature is the significant improvement to the Slide Show Editor, which is accessed from the Organizer. For those of you who have used PSE prior to PSE 11, will remember that the Slide Show Editor in those early versions was quite flexible and full-featured.

For PSE 11, Adobe replaced the original Slide Show Editor, because its legacy code was very difficult to maintain. They replaced it with a simple and very limited tool. In PSE 2018, the Slide Show Editor is significantly improved. These improvements made using it for me adequate, if not ideal, for short simple slide shows.

It still lacks many of the features that the original (pre-PSE 11) Slide Show Editor provided, such as a fully controllable pan and zoom (Ken Burns) effect, the ability to add text to a slide while controlling its font, size, and position, controlling the duration of each slide, and adding audio captions. The new Slide Show Editor allows short videos to be used. However, they can only be a maximum of 10 seconds long, which I feel is too short.

But, Adobe has done a good job of including several themes that mitigate some of the Slide Show Editor’s shortcomings. In the end, I found that enough features were included to allow me to once again use it for my simple slide show presentations. I still have Premiere 2018, Adobe’s consumer level video editing program for producing more complex presentations.

PSE 2018 is an incremental update to PSE 15. If you are a current user of the PSE 15’s Organizer, you may find these improvements to the Organizer are not sufficient to update to PSE 2018. However, for me the improved Slide Show Editor itself makes upgrading worthwhile.

And remember, PSE 2018 also includes the Photo Editor, which has its own set of new features. I’ll cover it next time.