Well, again there has been some time since my last post. I have been working on updating my class handouts for the fall term. I am looking forward to the start of classes. Both schools now will be using PSE 6. Last year the South Bay Adult School was using PSE 6, but the Torrance Adult Center was still using PSE 4. It is going to make things easier for me, plus I hope better for the students. My handouts have been a mixture of PSE 6 and earlier versions depending upon the topic. There will still be some differences in the content between the two schools, SBAS will be getting new Vista PCs with DVD burners. This opens up the potential for new classes, as well as additional topics in my current courses.

As I was working on my updates, I came across a change between PSE 6 and earlier versions in how the Feather command treats the edge of your image. Adobe has added the Refine Edge command in PSE 6 and CS3 (Professional Photoshop). When they this they also changed how the Select > Feather command works. In previous versions of PSE, there was no feathering done at the edge of the selection that was created by the edge of the image itself. In PSE 6, this not the case. See the figure below which shows the result of feathering a selection by 40 pixels in PSE 6. 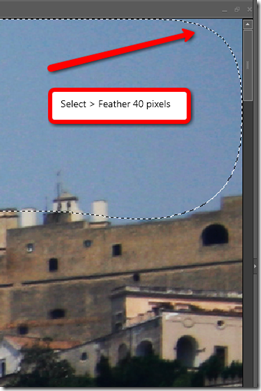 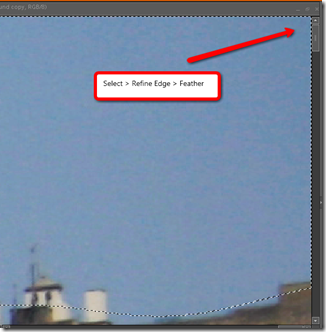 You may not notice this difference with small values of feathering, but with larger values you introduce the appearance of vignetting if you say darken the sky. There is a lot more to using the Refine Edge command, and it can be very useful in improving your selections. I will be exploring this command in one of my class exercises. By the way, I learned about this difference from a recent issue of the British magazine, “Digital Photo”.

Here is another tip I learned recently. Unfortunately, I do not know its source. You are probably aware that one way to add some snap to your photo is to make a duplicate layer and then change its Blending Mode to Overlay. Well according to my all too cryptic notes, you can gain the same impact without as much damage being down to the underlying pixels by doing the following:

Now as with the basic duplicate layer technique you can fine tune the effect by adjusting the Layer Opacity. Occasionally, what I will do in addition is go back into the Levels Adjustment Layer and make some adjustments using the sliders.

Are the results using this modified technique better than just changing the mode of the duplicate layer? I would be interested in your comments on this and  other techniques you use to give your images that added impact.